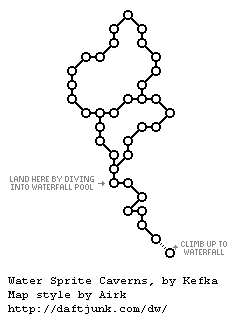 The sprite caverns are so called because of the water sprites who inhabit them.

They are located behind the waterfall just west of Razorback. To get in, you just go up the steps leading up to the waterfall, go behind it and into the cave that is there, and dive into the pool in the cave. This will deposit you in an underground cavern (it is a one-way trip, so you'll have to get out a different way).

The small network of tunnels that comprises the sprite caverns is quite dark. Additionally, while the cavern room seems to be fairly safe, the tunnels leading from it are not: water sprites will often appear in them and attack you.

The caverns have a special feature: anything you say out loud will be echoed back. This can make them quite useful for tming languages.

North of the entrance cavern is a loop, shaped like a sort of warped and flattened figure eight.

East of the entrance cavern is a twisty, but short, tunnel that leads towards the exit, ending at another underground cavern. Going through the part of the waterfall covering the exit will get you to a ledge outside, from which you can go back up.