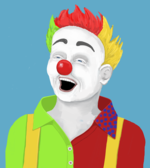 Maintainer/chief bearer of Ye Olde Bumper Booke of Funne. I was going to hold out until the Fools Guild actually had a functioning Egg Museum before making a description, but based on the gear I wear in-game I guess this is what I look like.

All Fools must learn the Material and the Jestures as set down by the guild founder Jean-Paul Pune. If you look into RW things like la Commedia Dell 'Arte, the progenitor of RW clowns, you can see where Pratchett got his ideas from[1]. Talking about how to be funny seems to encourage obsessive codifications and manuals of minutiae which are very far from being funny when read. Even something as recent as pie fights from early Hollywood films are tightly codified as to what is and isn't funny[2].

The comedic mantra and gestures that must be repeated (conceptually introduced in Wyrd Sisters) by anyone wishing to be considered a serious Fool, is very close to priestly rituals and sacred vs profane words and deeds. It's for this reason Prachett also saw the Fools Guild as a quasi-religious order and sited them in premises recently vacated by another religious order, The Brotherhood of Infernal Zoth the Undying Renderer. 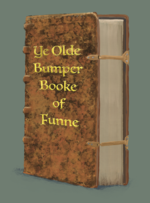 Given all of the above and that the library in the Fools Guild, in its current state, is simply a backdrop, I felt the Booke was crucial to being a Fool, as crucial as performance. So I set about creating both the Booke and performing the punes rendered into Elizabethan English on the One talker channel. The reasoning for the wilful obfuscation is that Pune's original treatise, on which all of the Guild's teachings are based, would be about as old in DW terms as Shakesperian plays are to us RWers. Initially I started posting the punes as a form of quality assurance. Editing and tweaking the puns based on reactions and suggestions, But then it seems the mud took the punes in and adopted them. Something that had never occurred to me would happen. Over the weeks that followed having to write everything out by hand started to get a little taxing so I looked at ways to, mud legally, automate the process.

This resulted in the creation of a script written in perl to automate the process of adding the formalised introductions to the punes based on the Fools Guild motto and the ritualised gestures that accompany the puns, then merging them with a random pune pulled from the Booke. The actual choosing and posting of the puns are still manual. I experimented with using Lua but found the implementation a bit spotty in the client I use and given the minimal gain from using Lua I didn't really have the inclination or desire to chase down the devs about it as the original perl implementation works without issue.

I also created a Fools Guild Coat of Arms based on written descriptions and added it to the Fools Guild wiki page because I felt it was lacking: 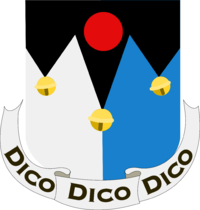 the Fools Guild Coat of arms
Retrieved from "https://dwwiki.mooo.com/w/index.php?title=User:Neep&oldid=69091"