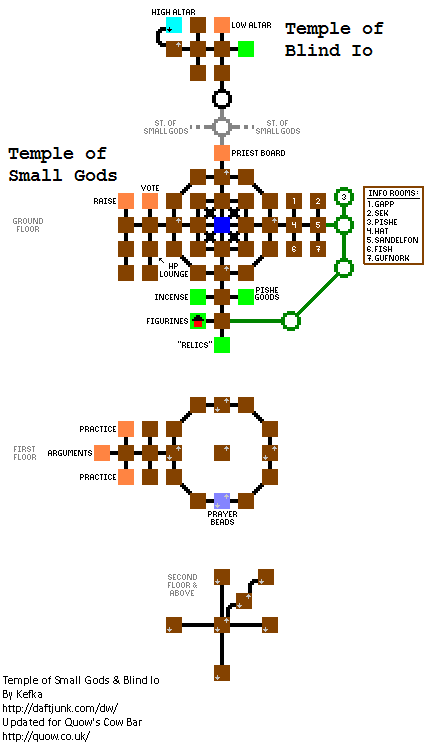 The entrance of the temple has a Priests bulletin board.

Heading south from the entrance, the ground floor consists of a square central atrium with a cloister running all around it. Three wings are to the east, west, and south of the atrium. An outdoor garden area runs along the outside of the east and southeast edges of the temple, connecting the east and south wings.

The atrium is a square three by three rooms. In the centre is a fountain, which is a source of blue water.

The cloister surrounds the atrium, and connects to it at the north, east, south, and west compass points. At these points there are stairways leading up, and the wings are accessible.

Entering the west wing, there is a voting booth to your north and a minister lounge to your south. The voting booth is where you can vote in high priest elections, cause schisms or support a priest who caused a schism. To vote, you need to be at least 2 days old and priest or follower of the deity concerned.

Moving on, Harry's room is to the north and the filing rooms are to the south. Harry can raise any ghosts who ask him.

In the east wing are six chapels with different priests and priestesses who represent and will tell you about various gods. They are:

Scoone will additionally transport newbies to the various temples in Ankh-Morpork. Say "help" to prompt him, then mention the temple you want to go to.

East of Hannah's room, you can reach the gardens.

Entering from the east wing, you reach a garden with various flowers--violets (which can be gathered), primroses, clematis, and roses.

To the north is a grove of trees and a pool. Looking at the pool, you can see that it's devoid of coins--this is notable because this used to be the pool for buying lives, and a Pishite area. Pishe now has her temple, and life pool, in the Pishe Waterpark instead, but Althea of Pishe still wanders in from this room.

To the south is more of the garden, with sunflowers, roses, and Hydrangea shrubs, as well as a bench. Florette the bunny rabbit lives here[1].

Southwest of Florette is the herb garden. One can find (and gather) -

To the west, you can enter the south wing.

The south wing contains the shops. Entering it from the atrium, there is an incense shop to the west and a miscellaneous shop to the east. The incense shop is run by Ben the ex-herbalist, and sells scented and special incense, as well as incense burners, and has a rotating stock. The miscellaneous shop sells various pishite priest goods, as well as an information booklet about the seven worshippable deities[2].

Heading south, there is a priest furniture shop to the west and a door connecting to the gardens to the east. The furniture shop sells various deity-themed furniture[3], useful or simply decorative.

At the southernmost end of the corridor is the "relic" shop of Strike-Meself-With-Lightning Dhibbjaramasphelopetalon. He sells deity dolls and various little... oddities.

The first floor may be reached through any of the four staircases in the cloister surrounding the atrium. It consists of a viewing gallery directly above the cloister, and the guild school on the west side.

From the viewing gallery, you can see various parts of the fresco (as well as the rooms in the atrium below beneath) from different rooms, and the staircases continue upwards. Gemma sits on the south staircase in the gallery and can make custom prayer beads.

You can go west from the western staircase to enter the guild school (although non-priests will not be able to go through this door, they may be passaged in). There is a small chapel to the north of the entrance, and a classroom to the south. Heading west along the corridor, there are two rooms to the north and south containing imps for practicing rituals on. Finally, in the westernmost room is a tome where you can learn religious arguments for debating.

Going up from the stairs in the gallery, you'll find the tops of the staircases. Here, there are various shrines, and you can access the central room leading up to the bell tower and down to the lighting room.

Heading up into the tower, you'll first find the Templar's room. This is where the God Squad stays when not defending npc priests. Attacking them here may lead to Gufnork striking you dead.

Further up is the very top of the bell tower, containing the water clock. From here, you can look out across the city[4].

Rawrax also wanders the ground floor, and can be induced to sell any priest a hat appropriate to their guild level and faith.

Althea of Pishe can often be found here, though she often wanders out of the temple as well. She can perform heal on players who ask, and are injured enough, and she sometimes performs relief on Pishites. She also fights Kess of Sek whenever they meet.