This is a summary table of the results of performing Major Shield with different bonuses (usually de.se, but sometimes de.ta) and under different conditions. All durations are in seconds. The "base" column is the duration without any visible ritual modifiers whatsoever. A "-" indicates that isolating that particular modifier wasn't possible with that deity (e.g., all Sandelfon high altars are indoors, so it isn't possible to get only the high altar bonus with a Sandelfonian. Similarly, several deities only have one unique ritual modifier.).

Many thanks to Yukk, for all his help gathering the higher bonus data.  :)

Generally, these durations were the result of choosing the "best" duration from multiple performances (at least two). In cases where there was variation, the "best" numbers were the ones that were most consistent and seemed to be affected the least by lag. Since--when the MUD isn't lagging--duration seems to be consistent for a given bonus and conditions, I'm assuming that any variation was due to lag: either of the "protected by" message or the "expires" message. This seems more reasonable than supposing a random factor of a few seconds, and it's also encouraging that I was able to find a formula that fits all of these "best" base durations perfectly. However, there's still some possibility of error.

A scatterplot of the data in the table below: 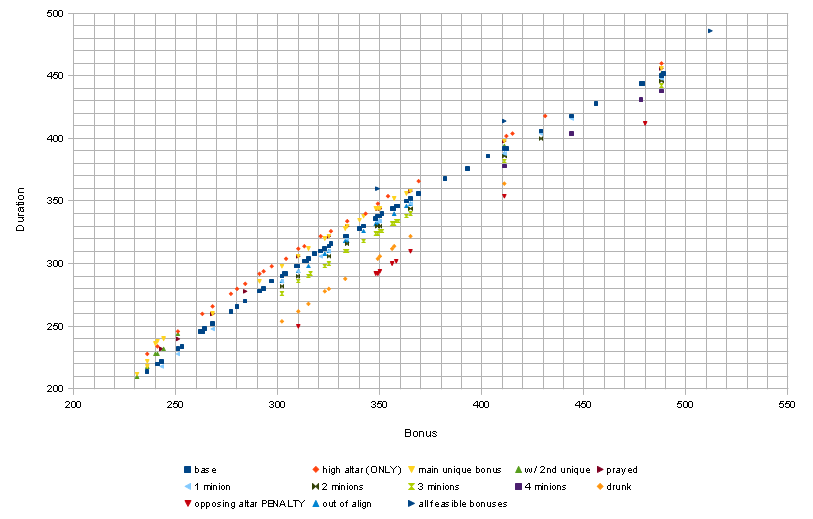 A graph of the base durations: 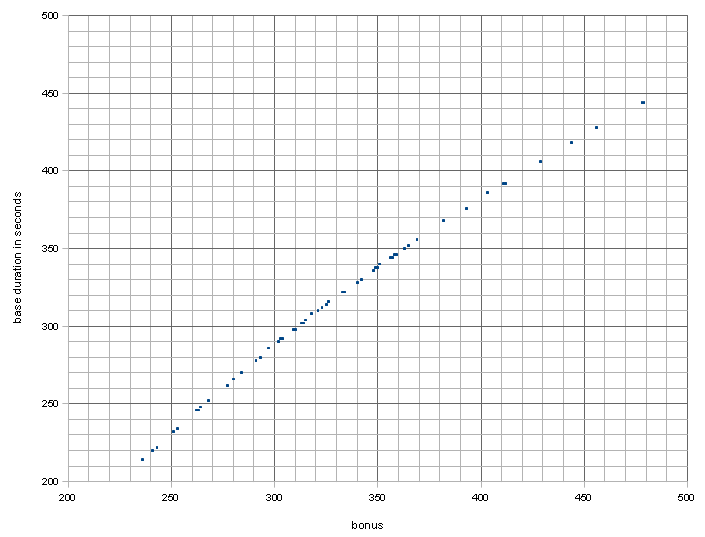 For all of these points, this formua yielded the exact duration:

While it still may be wrong, it seems very reliable.

Ritual modifiers--both positive and negative--have a reduced effect as bonus increases, rather than providing a flat bonus or penalty to the duration. It therefore made sense that what they actually do is provide a bonus or penalty to effective bonus, since bonus vs. duration is a logarithmic function and the benefit of having, for example, a bonus ten points higher, decreases as your bonus increases. It turns out that this model fits the data.

To determine the exact effect of ritual modifiers, I took various bonuses and durations for the modifiers, and worked backwards to see what bonus should (according to the formula above) give that duration as a base duration. Since that typically resulted in a range, it usually takes at least two or three sets to narrow it down. For example, for a particular modifier--being out of alignment--performing with a 357 bonus results in a duration of 340. A bonus of 351 or 352 will give a base duration of 340 seconds. This means that being out of alignment reduces your effective bonus by either 5 or 6. Performing with a 363 bonus instead results in a duration of 346, and the bonuses that give that as a base duration are 358 or 359. According to that, being out of alingment reduces your effective bonus by either 4 or 5. Looking at both of those, being out of alignment appears to reduce your effective bonus by 5, because 5 is the overlap.

This was built under the assumption that the formula for determining the base duration (above) is correct, so if the formula is off, the conclusions here may be as well.

The following table is of those sets. It also has some sets of combined modifiers.

The baton bonus seems to be special, varying widely. Sometimes having both hands full seems to roughly double it, but not always.