From Discworld MUD Wiki
(Redirected from Monks of Cool)
Jump to: navigation, search 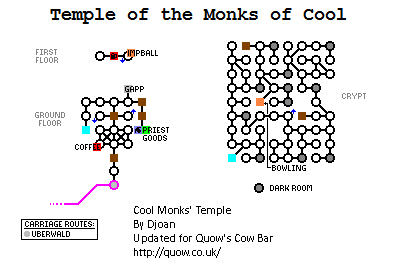 The Temple of Cool is home to the Monks of Cool, and is located in northern Uberwald.

The temple consists of three levels: the ground floor, upstairs, and the crypt.

At the entrance is a cloakroom, where you can hang up clothes and use the clothes press (which repairs clothes).

To the north is the foyer, which consists of six rooms. The two eastern rooms have a table listing the five people who have spent the most in the temple, and a board detailing how much the temple has earned. In the southwest corner is an espresso machine.

To the north of the statue exhibition is a hallway that leads to the west and east. There is a canvas here, and more of them to the west. At the end of the corridor (to the west and then south) is the Fashion Policewoman.

If you go east instead, there's a door leading into a Gapp shrine, where there is a religious instructor. Further along is the reading room (where you can read the pamphlets, leaflets, handbills and catalogues), the library, and finally the Cool shop. Priestly Gappic items are sold here, and Enne Ira sells custom clothing and jewellery that work as club badges.

The top floor has an impball table at the top of the stairs, a bar to the west of that, and a balcony to the west of the bar. The bar sells various types of cocktails, and Sister Ti-Ti Effenne and Sister Bi-Bi Effenne hang out on the balcony, giving advice and making comments about the cocktails.

The crypt is a dark, eerie maze, where strange pictures come and go.

There is some music painted on a wall on the west side, a bowling alley somewhere in the middle of the maze, and pieces of art throughout.

It's too cool to perform rituals here--at least all the way, as you can start performing them.

The Monks and Nuns