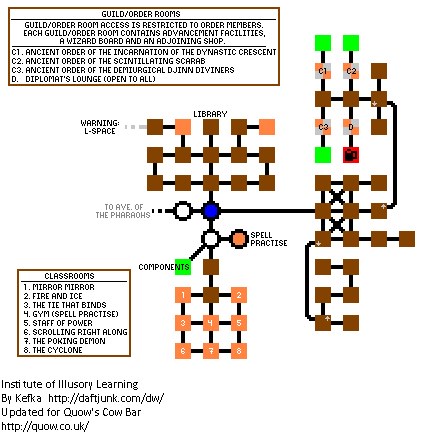 The Institute of Illusory Learning (abbreviated as the IIL) is the klatchian branch of the Wizards' Guild, located on the Avenue of Pharaohs in Djelibeybi.

It is currently not possible to join the Wizards' Guild via this institute, or any of the klatchian orders.

The Illusionary Institute of Learning contains a library much smaller than that of the Unseen University, containing only two spellbooks and five spells. The guild also contains a gym with an enslaved demon, Ghrigghi, to practice spells on.

The library is located on the north side of the courtyard, containing two spellbooks:

Successful navigation of the library is based on the wizard's bonus in adventuring.direction, with exits following the standard format of north, south, east and west. Insufficient skill in direction will simply take the wizard in the wrong direction more often than not. One can follow another player with high direction bonus to make this easier.

The Illusionary Institute of Learning consists of three orders, all sharing the same primaries as Mrs. Widgery's Lodgers.