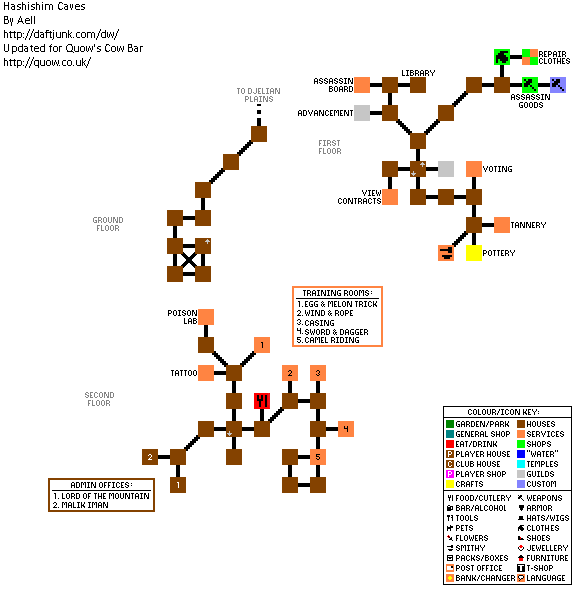 The Hashishim is an assassin specialisation based in the Klatchian cliffs west of Djelibeybi and having a small branch in Ephebe. They are known for being the first who practiced assassination as a profession and for being dedicated hasheesh enthusiasts. Their public inhumation office is located in the Hood, five north of Daft Bugger.

There are a few ways to join. If you speak Djelian, you can go to the public inhumation office, but the Hood can be dangerous, so be careful. If you speak Ephebian, there is a hidden room in a tavern on the east side of Ephebe where you can also be shown the way to the mountain and the Abd al Alim. It might also be worth asking either an online Hashishim, or someone else, to help you.

The Hashishim vote for their admin during an election.

The Abdulrahman is appointed by the Lord of the Mountain.

The Path to Paradise

Your lives are already over. All that remains is where you will spend all of eternity once this transient existence comes to an end. The hasheesh, your window to Paradise, and your blade, a means to get there, are all you need. The Path to paradise is a very simple path, and yet few will maintain the will to stay the course. All that is required is unquestioning obedience to the Order of the Hashishim. Obey to the tenets herein and your place in Paradise is assured. Stray from the path and damnation eternal shall be your reward.

By dagger or by sword, you shall perform Deliverances to those condemned without fear, without regret, without remorse, without pity, and above all, without hesitation.

The Tenets of the Hashishim

1.You will not come to any arrangement with either the Condemned, or those who request the Deliverance.

2. You will not inform the Condemned of their forthcoming Deliverance.

3. You will not take any item from the corpse of the Condemned in aftermath, or course of Deliverance.

4. You will not attack or steal from your fellow Hashishim.

5. You will not hinder fellow Hashishim in their execution of Deliverance.

6. You will not hinder other assassins in the course of their duties.

The Hashishim strive to maintain cordial relations with like-minded foreign institutions. Therefore, while the use of violence against them is allowed, excessive or improper actions shall not be tolerated. Those Hashishim who create disharmony with the spirit of the mountain through abuse of these freedoms will lose both the protection and favour of our ancient institution, and will no longer be welcome on the path to paradise.

Important information for the Trials

The Hashishim receive these titles. [1]

After passing the seventh test a graduate title is awarded based on level.

Hashishim may also receive a prefix before their name. [2]

The following titles may be bestowed on non-hashishim: