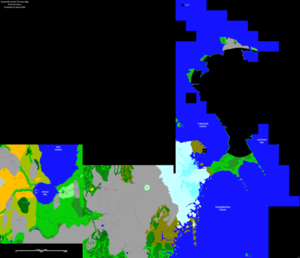 The Discworld (also known as The Disc) is the setting for Discworld MUD. It is a mostly flat, circular expanse carried on the backs of four elephants, who in turn stand on the back of the Great A'Tuin, a giant turtle that swims through space.

The Disc features locations such as the cities of Ankh-Morpork, Bes Pelargic and Djelibeybi, and terrains such as the Circle Sea and the Uberwald forest. New characters may choose from dozens of starting locations all over the Disc, the options illustrating the web of various cultures and languages.

Though many are born on the Disc, it is up to the individual to prove their worth as a citizen of one of the Disc's major cities.

There are currently six major regions the Disc tends to be divided into (and subdivided into many, many more). Moving generally west to east, they are: