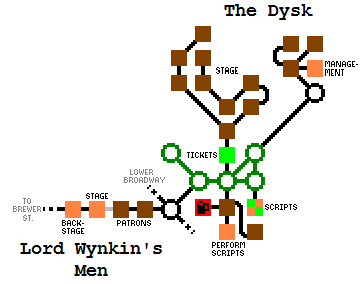 The middle ground between Dysk Theatre and the Actor's Guild. It is located North East of Lord Wykin's Men off Lower Broadway on God's Collar. This area allows access to The Dysk Theatre, The actor's Guild, The Stage Theatre Managment Office and the Playwright's Guild.

The Disk theatre is a player based theatre that will perform plays created by players. These plays are voted in democratically and edited via the Stage Theatre Managment Office. The entrance to the Theatre can be found north of the Actor's Guild. Inside The Dysk is a ticket booth where information regarding show times, seating, and ticket prices can be found. There is also a donation box and top donator's names can be found on the backs of the chairs in the seating area.

Players can enter the theatre five minutes after the last viewing. A player can leave the Dysk Theatre and reenter if the play hasn't started. If a play has started and a player leaves, they will not be allowed back in.

While viewing a play a player can throw or chuck fruits at the stage which will either hit an actor on the stage or miss.

You cannot chuck or throw a fruit if there are no actors on the stage.

At the end of a play a player can choose to boo or applaud the play.

After a play has ended and the player has not left, Ushers will automatically relocate you to the ticket booth. You can purchase tickets for different seating arrangements via the ticket booth. A season pass can be bought for any seating which is the equivalent of 10 plays. The play experience is the same with any ticket but a higher priced ticket allows access to more areas of the theatre.

All performances start on the hour every oddly numbered hour, Ankh-Morpork time. A board found at the Dysk theatre ticket office shows the forthcoming performances. Due to a bug with the ticket office board the list often doesn't display correctly. The current play list is:

Previous plays can be found in the Archived Scripts listing.

found on the east side of the Actors' Guild and sells Lemon drink, Apple Cider and Lager Shady. It also is host to a shoe shine machine. More information can be found on the Eateries page.

can be found on the southside of the Actors' Guild. Here you can pay actors five Ankh-morkporkian dollars to preform a script in your inventory.

This will allow you to check any errors within your script or just see how it looks. Keep in mind that it will not be exactly the same as a production in Dysk Theatre as it will not preempt action with "On the stage,"

There is a second floor in the Actors' Guild but is under renovation and currently, has no real function.

As of the 5th of Offle Secundus, UC 2045 the Dysk Theatre Managers are: Rauna and Noshoes.

The Playwrights' Guild is a one room shop and service located to the east of the Actors' Guild.

Players can purchase scripts and a book detailing how to use them.

The Playwrights' Guild can copy any script that you want them to for a free.

Player's can also deposit scripts to be judged by the Theatre Management Office in order to be performed at the Dysk Theatre.

Alternatively, you can collect a script that you don't want to be performed anymore.