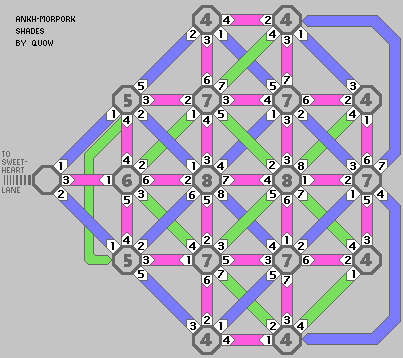 Quow's map of the Shades. 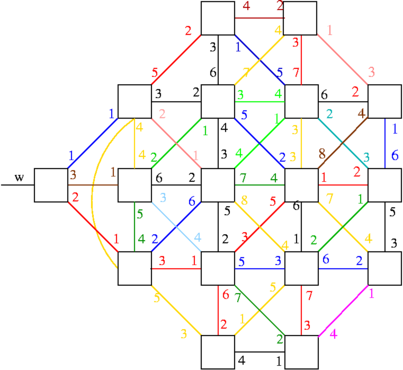 Filey's map of the Shades.

WARNING: The Shades is a dangerous zone.

A dark and confusing maze situated in Western Ankh-Morpork off Cockbill Street.

The Shades is divided in inner and outer sections.

The outer shades comprise Sweetheart Lane, Romeo Street and Lavender Mews, reached by leaving Cockbill street heading East. Rooms in the outer shades have normal exits. They are home to muggers which may be hidden, may auto-attack and can use backstab, ambush, snatch and delayed pursue. The outer Shades also frequently contains regular city NPCs who have foolishly wandered in.

Halfway along Romeo Street can be found the Troll's Head pub. The door is locked and a password is required to enter. The password may be obtained from another player or identified by carefully examining the surrounding area.

The bar contains Jak Raplin (weapon fence) as well as a dartboard. Trolls may spawn in the first room (same as inner shade trolls) who will attack players of a low Guild Level research

The inner shades is a popular experience farming spot amongst high-skilled players and groups. It is one of the most dangerous locations on the Disc for the unprepared or new player.

This area is a maze, room exits are replaced with numbers and cannot be 'look'ed through, the area and exits are however by and large static and the maze can be mapped.

It is inhabited by muggers, fighters and trolls all of whom auto-attack and delayed pursue. Muggers found in the inner shades are tougher than those found in the outer areas and carry different weaponry. They use the same commands as their brethren. Fighters are tougher than muggers and have access to heavy specials such as impale. Trolls are probably around as tough as Fighters but can be very dangerous to parry users due to their bodymass.

Anything that a mugger snatches from an NPC or Player will be 'dropped in shock' when the mugger dies, landing on the floor in the room. It is generally polite to attempt to return such found items to players, who may advertise their loss on talkers and/or boards.

The shades is a very popular spot at peak times due to the large quantity of high-xp npcs available. Since the denizens auto-attack care should be taken not to 'steal' kills from others hunting in the area.

If you enter a room in the maze containing other players who are fighting then you should move on immediately, you will have joined their combat automatically. If you happen to kill something before you can move then it is good practice to apologise.

It is a common practice with groups to 'herd' the maze. This is where a player rushes around aggressing the monsters before leading them all back to his group in a blob. It is considered poor manners to deliberately lure foes away from another player into your herd or to deliberately herd foes onto another player.

Finally Playerkillers in the maze should be wary. It is not unusual for PK fights to break out over the hunting rights to this area. Despite this, care should be taken not to put another Playerkiller into a position where they will be killed by the NPCs resulting in 'real' death as this is poor play.