Difference between revisions of "Research:Jogloran's Portal of Cheaper Travel" 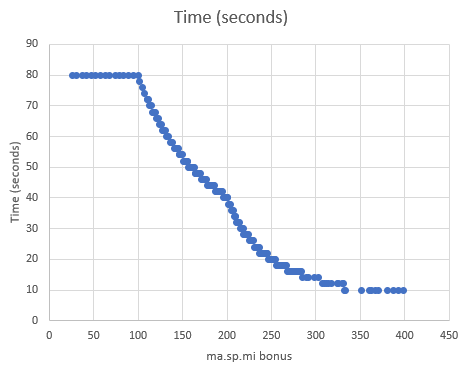 Okay, with a multi-segment curve model the equations look very clean and fit very accurately, giving me high confidence that they're correct.

It appears there's a fourth segment in play, presumably for 300+… the above curve (from 200 onward) fits somewhat but is clearly inaccurate for the 381+ data points. I suspect there is in fact a third curve, for 300+, but it's a bit hard to derive it with the small sample set currently available. It would help to pin down the transition points - where precisely does it go from 14 to 12, and from 12 to 10, and from 10 to 8.

Thanks for doing the math. Quow told me that the fastest cast time possible is 10 seconds, and I assume he has a ludicrously high bonus, so I believe him. Once we find the breakpoints for 12 and 10 seconds, the research will be complete!Helia (talk) 22:52, 27 May 2021 (EDT)