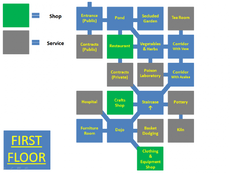 For more information about the Ninja you can consult A Guide to the Ninja of Agatea in the ninja library.

Once a ninja has passed the Chunin test he can train primary skills up to level 175. Being proficient in the skills needed to inhume is necessary before being allowed to take the test. Master Yung will test your knowledge. Completing the Chunin test will allow you to inhume npcs. This will not force you to become a player killer.

In order to graduate from the guild and train primary skills up to level 300 you need to pass the Ru Noperi. This will make you a player killer and you will be allowed to inhume other player killers.

Every Specialisation grants some specials items as certificates. For the Ninja these special certificates come in the form of Ninja Belts & Headbands. The belt also doubles as a Katana/Wakizashi/Ninjato scabbard. They can be bought from Wun Hair Bun in front of the library upstairs in the Ninja guild.

To advance your skills as a ninja you must visit Master Yung. He will require you to do a small chore before you can advance. Tools for this are found in the storeroom southwest of the restaurant.

The Ninja Guildhouse provides several service rooms and shops, a garden and a few rooms designated for training skills. Like most guildhouses it features extra rooms for the leaders of the guild, a communal chest and a voting room. Like other Assassins guildhouses it also features its own library and might have one or more non obvious rooms.

The Dojo within the Ninjas guildhouse has 3 dummies for training thrown weapons (first dummy), sword combat (second dummy) and unarmed striking (third dummy). It also features a balancing beam where one can train his acrobatics. Further it includes a weapon rack filled with two bokkens to give Ninjas a chance to spar against each other.