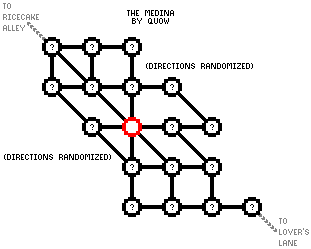 Map of The Medina by Quow

The Medina is a maze in the Red Triangle district (south-eastern district) of Bes Pelargic, Counterweight Continent.

It is filled with very tough npcs who travel in groups and will attack unprovoked.

Also, the exits with the Medina are confusing, making it difficult to escape easily.

Those who are killed by npcs here will find their money taken; however, their corpse will be dragged out of the Medina.