Difference between revisions of "Mano Rossa" 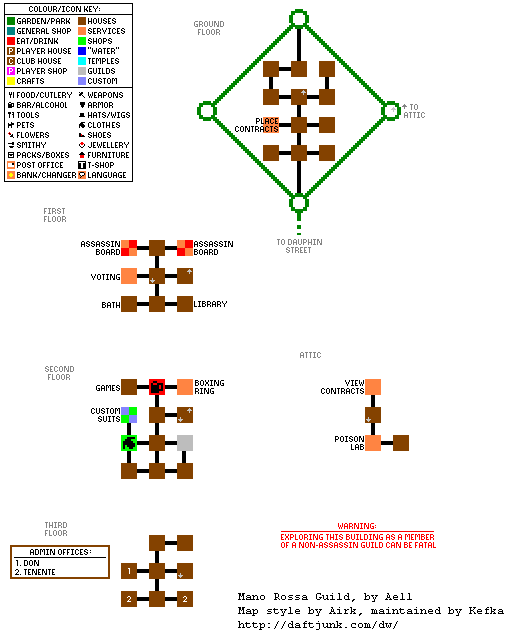 Map of the Mano Rossa Guild by Aell maintained by Kefka

The Mano Rossa are an assassin specialization found in Genua. The guild house is located just north of the palace, on Dauphin Street.

As many of the rooms in the guild house will get non-assassins killed if they wander into them[1], people wishing to join the guild should read the marble slab in the foyer, which gives directions:

There is a newbie chest in the boxing area on the second floor, next to the pub

It is in the from of a metal locker, type look locker when you are in the boxing area as it only shows up in the room description.

The Mano Rossa guild contains a wide variety of facilities

Madame Bellus teaches some of the available covert commands to assassins who meet the requirements.

Advancement of skills can be done in the library. Primaries can be advanced until level 75 and to level 300 after taking the Oath.

Once Mano Rossa are guild level 50 they can demonstrate to Arlen Laureato that they are ready for player killing by taking the Oath.

You can find Arlen and say oath to begin taking the Oath.

Taking the Oath only requires swearing and repeating certain phrases and does not involve any physical tests or questions.

Taking the Oath used to make one into a playerkiller before the changes.

You will be given a business card recording your inhumations and the inhume command after taking the Oath.

Nicknames can be acquired from Arlen Laureato after taking the Oath. These will appear either in-between one's name and family name (example: “Kimya ‘No Mercy’ Cutting”) or, if you there is no family name, directly after their name (example: “Monette 'No Mercy'” ).

It seems to be random which nickname you receive from a given pool and you don't need to accept a given nickname. This means that if you're looking for one in particular, it's possible to repeatedly say I want a new <category> title and say no until you receive the one you want.

The following post-titles appear automatically depending on your guild-level.

North of the clothing shop is Monsieur Gabbiani, who sells custom suits to Mano Rossarians. A suit consists of a jacket, waistcoat, fedora, and a skirt for females and trousers for males, and the creation process takes two (roundworld) days.

In the northern part of Genua, there is an equipment shop for the Mano Rossa. While anyone can get into it, only assassins can buy items there. The entrance is not immediately obvious however and can be slightly dangerous as well.

The storekeeper, Timothee, is also a custom outfitter, capable of making a large variety of custom throwing axes.

These commands are exclusive to assassins.

These are the primary skills for the Mano Rossa:

There are a limited number of items in the game that can be used to inhume as a garrote.

The Mano Rossa use business cards to keep a record of all and any hits carried out. If the card is lost it can be replaced by asking Arlen Laureato.

The Don of the Mano Rossa can appoint two Tenentes, the Vangelo and the Quartino. The Vangelo and Quartino support the Don and can place warning contracts on members of their own specialisation and limit access to the book for a lesser period of time.

Previous Dons on the Mano Rossa