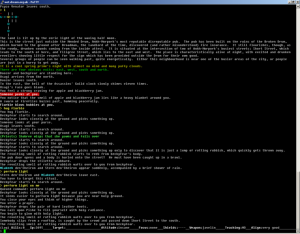 See MUD_client_tips#MUSHclient for many helpful plugins.

Highly recommended! Check http://quow.co.uk/ for the current version of Quow's MUSHclient Discworld Package. It includes MUSHclient pre-configured with all of Quow's popular and amazing plugins.

Rapscallion is an ancient MUD client for Mac OS that few people use. You can read about it at [http://www.oocities.org/siliconvalley/way/6818/] and if you are still using it you can find a couple scripts on MUD_client_tips#Rapscallion

Nazar like others has seen crashing issues with Blowtorch. Most notably when minimizing while scrolled back, or sometimes when logged on for hours straight most likely due to excessive memory use. It is important to Export your settings so that you do not lose any button configuration.

Visit the Screenshot_Gallery to see a sample button set.