The purpose is to narrow the gap between the XP earning potential of the least and most advanced players. The following graph shows the reduction curve. 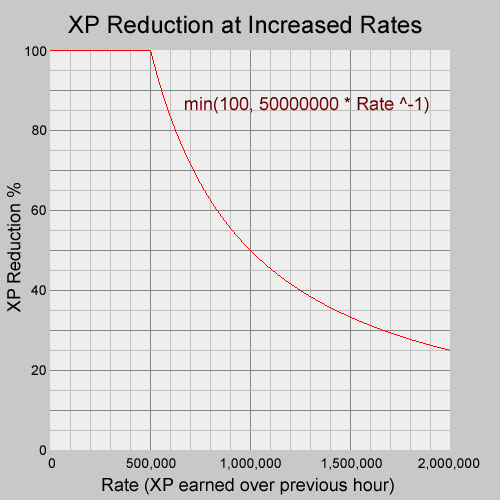 The effect of XP reduction can be most easily spotted in heartbeat XP, as seen in the monitor when in combat. Initially heartbeat XP is awarded at the rate of 3 XP every heartbeat. XP Reduction is applied to heartbeat XP and the result rounded down to the nearest integer. Heartbeat XP therefore drops to 2 at a rate of 500 kXP/hr, 1 at 750 kXP/hr and 0 at 1500 kXP/hr. Note that although the heartbeat XP does decay to 0, this is simply due to integer rounding on such a small income, larger incomes such as bury XP will still yield a return after reduction.

Because XP reduction is based on the XP earned in the previous hour it is possible to earn a significantly greater amount of XP in the first hour after a long period of inactivity (Peak XP Rate). The reduction formula then forces the rate down and after a couple of hours it begins stablise. Of course this assumes that XP income remains roughly static, the following graph shows this effect in practice for various income rates. 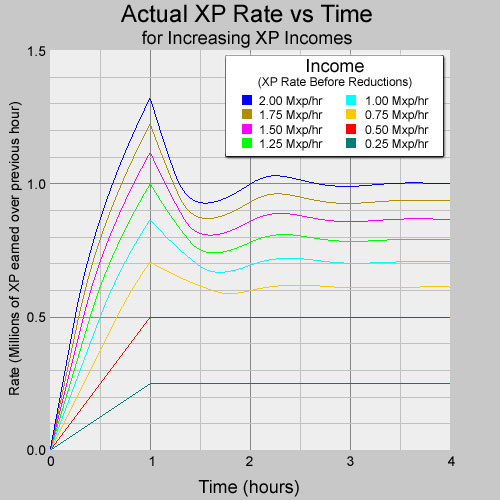 Assuming that the base XP rate is static, the XP rate will stabilise when:-

which can be rearranged to:-

Or in other words the geometric average of 500,000 and the base XP rate.

The Peak XP rate can be used to significantly reduce the difficulty of attaining many of the achievements under the "Numberchasing" category:

The following graph shows the curve of Peak XP rate vs income. 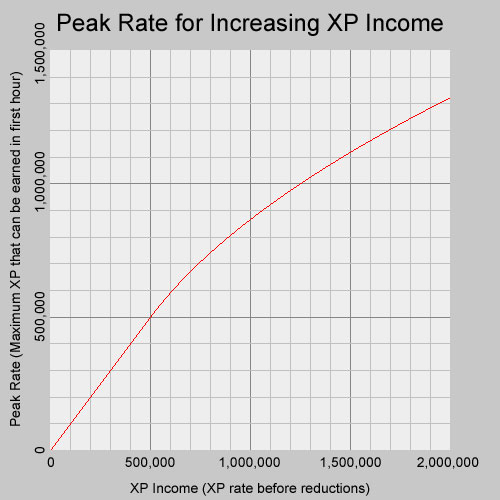 To take the example of "Good Day", a sustained income of approximately 1.25 million XP/hr would be required to achieve the necessary Peak XP rate of 1 million XP/hr.