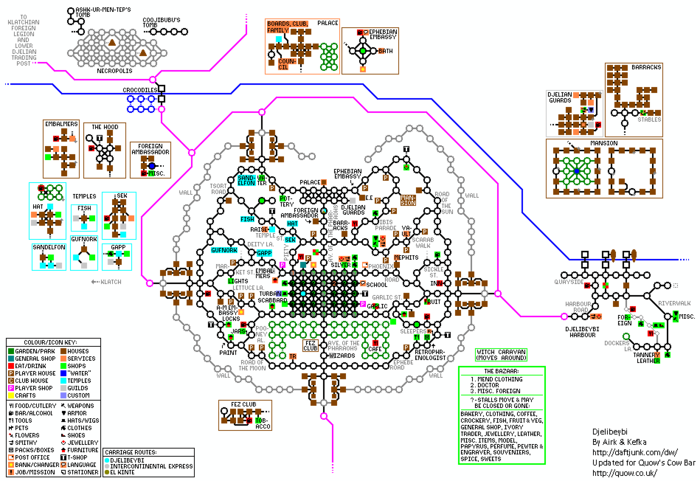 Djelibeybi is the name of both the country and the major city.

The language in Djelibeybi is Djelian, and the currency is the Toon.

The killing of priests, cats, or local contractor npcs in Djelibeybi or the Lower Djelian Trading Post is punished by being thrown to the crocodiles. ("Followers" and "madmen" appear to not count as priests for this purpose.) Theft is punished by throwing the culprit into a random location in the nearby terrains. This is not usually particularly dangerous, although there's always the possibility of being thrown into a room with a rogue bull elephant or something similarly aggressive.

Additionally, an NPC called Nmad'Ho in Ankh-Morpork will attack criminals of Djelibeybi. It may just be for killing cats, priests, or npcs, not theft.

Warriors and soldiers will--after a short delay--join in fights to protect other npcs in the room. Mercenaries may, as well, though they require payment first.

The Hood contains some npcs who may attack (including ambushing) without provocation. They do not appear to attack everyone.  research If this has been marked on a page, it's because there was something that probably isn't known, that the person who edited the page thinks could be found out. Perhaps you could figure this thing out, and be famous evermore.

There is a player council in Djelibeybi.

In the approximate centre of the city is the Bazaar. The Avenue of the Pharaohs runs straight north-south from the Square of Ancestors at the north end to a gate out of the city at the south end, bisecting the the Bazaar and the city itself. A wall, which you can get on top of, goes around all but the middle north of the city, and there are gates (leading into the city and allowing access to the wall) on the east edge, the south edge, the west edge, and the northwest corner.

The Djelibeybi Caravan, the International Express carriage, and the El Kinte Caravan stop in Djelibeybi, at the north end of the Avenue of the Pharaohs. The witch caravan travels around the city.

The West Circle Sea Ferry is found at the harbour.

Player housing is scattered throughout Djelibeybi.

There are two player shops, the bank located on the east edge of the bazaar, and the Vulgar Unicorn just off the northwest corner of the bazaar.

The following facilities can be found in Djelibeybi:

West of the city in the cliffs are the Hashishim, an assassin specialization. Their public inhumation office is in the city itself, in the Hood.

The local branch of the Thieves' Guild is located on Sickle Street in the east of the city, through a hidden exit.

A travelling caravan, which serves as the Klatchian branch of the Witches' Guild, travels around the city.

The Institute of Illusory Learning on the Avenue of the Pharaohs is the local Wizards' Guild, with a library, a shop, and a practice area.