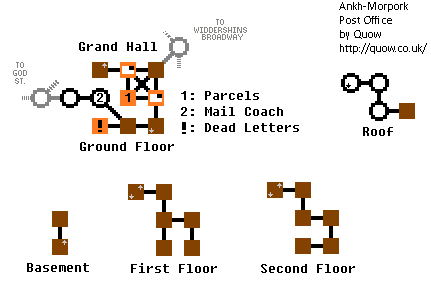 This page is about a source of missions / jobs.

To see what the kind of letters there are, offer to help in the dead letter office of the main AM post office. You don't need to offer your help to start a job, you can pick a type of letter directly.

You will be given a choice of difficulties:

If you do two delivery missions of the same level of difficulty back to back, the xp reward is halved for the second one and then halved again if you do another, etc. This resets to the full xp reward one hour after the most recent delivery mission of that difficulty level.

Times listed above are in the Disc temporal reality.

The money you receive as payment is usually in the currency used in the location where the recipient happens to be when the letter is delivered.

If you don't want to deliver the letter Frank gave to you, give it back to him; however, you will need to wait ten Roundworld minutes before you can attempt another delivery.

If you lose the letter and would like to get another without waiting for the delivery time to expire, tell Frank that you would like to quit. You will still need to wait the ten Roundworld minutes before he will give you another one.

If you find a letter another player has dropped or fumbled, you can return it to Frank who will tell you who it was given to. This does not make the letter available for other players if it has not expired yet. You may want to check the expiry before returning and tell the player if this is the case so that they can quit manually as above.

Local NPCs are found in Ankh-Morpork and are stationary.

Close-by NPCs are located in Ankh-Morpork or another nearby town, and often move.

Far away NPCs are generally stationary.

Distant land NPC all move. Use the bold part of their name for seeking.

WARNING: See the note[1] about some NPCs being masked by others with the same seeking name.

It is usually worth trying to spawn the NPC at their spawn locationresearch.

Difficult customers generally attack on sight or are very hard to reach.

Letters are limited, probably a maximum of 3-5 letters (possibly only 2) can be in circulation at any point. This means that if you log out with a letter, that's less one letter that can be delivered. If you got your hands on a letter and the target is dead, while it's entirely up to you, it might be better to hand it right back to Frank and wait that 10 minutes to get another letter rather than holding it till the NPC spawn. Certain NPCs like the smuggler captain or Triad Boss are almost always dead due to being hotspots. Please don't log out with difficult letters. You're making it hard for other fellow letter couriers.