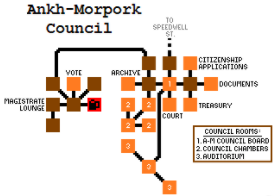 The council allows players who are at least 10 days old to obtain citizenship in Ankh-Morpork, allowing the player to rent their own houses and shops in the city and to vote in council elections. The council is comprised of seven player magistrates. Magistrates manage the business of the council, including proposing and voting on rule changes, ruling on cases filed in the court room, setting the tax rate and distributing funds from the council's coffers.

Cases can be filed in the court room by anybody who believes one of the council's rules to have been broken. Magistrates then have the option of enforcing certain punishments on rule breakers such as fines, blacklisting, banishment from the city or negative titles.